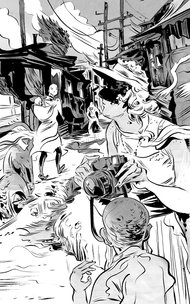 SLUM tourism has a long history — during the late 1800s, lines of
wealthy New Yorkers snaked along the Bowery and through the Lower East
Side to see “how the other half lives.”

But with urban populations in the developing world expanding rapidly,
the opportunity and demand to observe poverty firsthand have never been
greater. The hot spots are Rio de Janeiro, Mumbai — thanks to “Slumdog
Millionaire,” the film that started a thousand tours — and my home,
Kibera, a Nairobi slum that is perhaps the largest in Africa.

Slum tourism has its advocates, who say it promotes social awareness. And it’s good money, which helps the local economy.

But it’s not worth it. Slum tourism turns poverty into entertainment,
something that can be momentarily experienced and then escaped from.
People think they’ve really “seen” something — and then go back to
their lives and leave me, my family and my community right where we
were before.

I was 16 when I first saw a slum tour. I was outside my 100-square-foot
house washing dishes, looking at the utensils with longing because I
hadn’t eaten in two days. Suddenly a white woman was taking my picture.
I felt like a tiger in a cage. Before I could say anything, she had
moved on.

When I was 18, I founded an organization that provides education,
health and economic services for Kibera residents. A documentary
filmmaker from Greece was interviewing me about my work. As we made our
way through the streets, we passed an old man defecating in public. The
woman took out her video camera and said to her assistant, “Oh, look at
that.”

For a moment I saw my home through her eyes: feces, rats, starvation,
houses so close together that no one can breathe. I realized I didn’t
want her to see it, didn’t want to give her the opportunity to judge my
community for its poverty — a condition that few tourists, no matter
how well intentioned, could ever understand.

Other Kibera residents have taken a different path. A former schoolmate
of mine started a tourism business. I once saw him take a group into
the home of a young woman giving birth. They stood and watched as she
screamed. Eventually the group continued on its tour, cameras loaded
with images of a woman in pain. What did they learn? And did the woman
gain anything from the experience?

To be fair, many foreigners come to the slums wanting to understand
poverty, and they leave with what they believe is a better grasp of our
desperately poor conditions. The expectation, among the visitors and
the tour organizers, is that the experience may lead the tourists to
action once they get home.

But it’s just as likely that a tour will come to nothing. After all,
looking at conditions like those in Kibera is overwhelming, and I
imagine many visitors think that merely bearing witness to such poverty
is enough.

Nor do the visitors really interact with us. Aside from the occasional
comment, there is no dialogue established, no conversation begun. Slum
tourism is a one-way street: They get photos; we lose a piece of our
dignity.

Slums will not go away because a few dozen Americans or Europeans spent
a morning walking around them. There are solutions to our problems —
but they won’t come about through tours.

Kennedy Odede, the executive director of Shining Hope for
Communities, a social services organization, is a junior at Wesleyan
University.