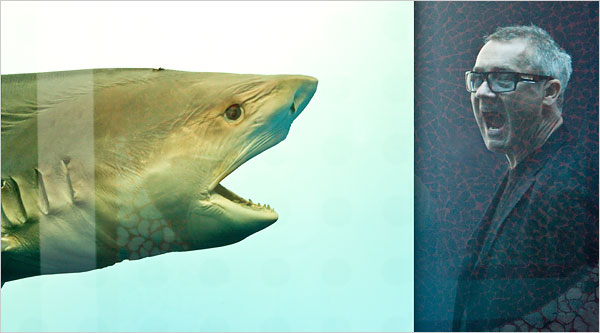 LONDON — Damien Hirst [2] has a recurring nightmare. His big auction here is about to begin, and the Sotheby’s salesroom is overflowing with collectors and dealers. The auctioneer opens the bidding. Suddenly the place goes quiet. Not a paddle is raised.

“The galleries have convinced everyone not to bid,” Mr. Hirst said last month, recounting the dream while overseeing the installation of “Beautiful Inside My Head Forever” his one-artist, two-day auction at Sotheby’s. Beginning on Monday night it will include 223 works that he has produced over the last two years.

In a move that some say has the potential to change the face of art dealing, Mr. Hirst has cut out his dealers — the New York-based Gagosian Gallery and the White Cube in London — and taken his work straight to auction.

Every year or so Mr. Hirst, 43, likes to cause a sensation. Last summer thousands of people lined up outside White Cube waiting to glimpse a human skull cast in platinum and covered with 8,601 diamonds. Mr. Hirst claimed to have sold the piece at its $100 million asking price. But the buyer is said to have been a consortium of investors that included Mr. Hirst himself; Jay Jopling, owner of White Cube; and Frank Dunphy, Mr. Hirst’s business manager.

A few months earlier Mr. Hirst had installed an animal kingdom that included 30 dead sheep, 1 dead shark, 2 sides of beef, 300 sausages and a pair of doves in the lobby of the Lever House in New York. And his “Physical Impossibility of Death in the Mind of Someone Living,” another shark, submerged in a tank of formaldehyde (as are all his dead animals), sold to the hedge-fund billionaire Steven A. Cohen for $8 million. It has been lent to the Metropolitan Museum, where it is on view. “Even if the sale bombs, I’m opening a new door for artists everywhere,” Mr. Hirst said.

Although few are capable of producing enough work to hold a one-man sale, Mr. Hirst’s effort could inspire others to consign pieces to auction houses rather than to dealers. (There’s talk in the art world that the Japanese artist Takashi Murakami [3] will be the next to organize an auction of his work.)

This isn’t Mr. Hirst’s first foray into the auction business. A charity sale of works by 100 artists that he and Bono [4] organized at Sotheby’s in New York in February raised $42 million for AIDS relief in Africa. More to the point, in 2004, a year after the closing of Pharmacy, a trendy London restaurant of which Mr. Hirst was part owner, he auctioned just about everything inside it: his butterfly paintings and glass-fronted medicine cabinets, aspirin-shaped bar stools, matchboxes illustrated with medical tools, even the china with the restaurant’s logo on it. The special Sotheby’s sale in London took in about $20 million.

Mr. Hirst may be gambling with the current sale, but he has concentrated for months on marketing. He invited major collectors like the fashion designer Miuccia Prada [5], the Ukranian businessman Victor Pinchuk and Christie’s owner, François Pinault [6] to his Gloucestershire studios for a private preview of the auction.

The art for sale will be variations on familiar themes. There will be dead animals galore: black sheep and tiger sharks, a dove, a zebra. There will also be glass cabinets filled with everything from diamonds to cigarette butts. Paintings and works on paper decorated with his signature skulls and dots, swirls and butterflies are available in all sizes, including a 14-foot-long triptych to a 6-foot-square painting. As part of his sales pitch Mr. Hirst said that he would no longer be making spin or butterfly paintings and that there would be far fewer dead animals and almost no dot paintings.

Estimates range from a high of $15.8 million to $23.6 million for “The Golden Calf” — a white bullock preserved in formaldehyde, whose hoofs and horns are made of 18-carat gold and who has a gold disc crowning his head — to about $60,000 for a colored-pencil drawing of dots.

Sotheby’s and Mr. Hirst won’t reveal details of their financial arrangement except to say that no guarantee has been paid to Mr. Hirst. If the sale follows his recurring dream and falls flat, the unsold work will be returned to him, and Sotheby’s will have to write off its costs.

Naysayers wonder if Mr. Hirst is killing his own golden goose. They point out that his market has slowed considerably this year: in recent London auctions, about a quarter of more than 20 works on offer went unsold.

Alberto Mugrabi, a Manhattan dealer and collector, said he had been getting calls from people who had never bought a work of art before, asking for his advice. “It will open up his market,” said Mr. Mugrabi, who owns about 150 works by Mr. Hirst and will be attending the sale. “This is a one-time thing. But if he tries it again soon it could be a disaster.”

He and other seasoned dealers say the estimates are roughly half what galleries have been getting for equivalent works, but that the preliminary numbers may be misleading. “It doesn’t matter what the estimates are, it matters what they sell for,” said Sandy Heller, an art adviser whose clients include Mr. Cohen, the hedge-fund billionaire.

Mr. Hirst has help in his marketing efforts. Sotheby’s has devoted every inch of its London gallery space to “Beautiful Inside My Head Forever.” Some 30 guards have been employed to watch over the installation during the 11-day free public viewing, which was open until midnight Saturday and was seen by nearly 9,000 people by Sunday night. (It was also to be on view Monday morning.)

Sotheby’s reinforced its floors to show Mr. Hirst’s dead animals. (The calf weighs 10 tons.) And it hired the New York architect Peter Marino to transform a rabbit warren of tiny back offices into a suite of rooms for V.I.P. buyers, with polished mahogany doors and walls lined with Mr. Hirst’s butterfly paintings. The space resembles a five-star hotel; several rooms have fireplaces and all are equipped with flat-screen televisions to allow buyers to watch the sale live and secretly bid by telephone.

To make sure the works reach as wide an audience as possible Sotheby’s experts have taken highlights of the sale everywhere from the Hamptons to New Delhi. The three-volume catalog, which Sotheby’s officials say cost about $240,000 to produce, is meant to be a collector’s item too. Weighing five pounds, it has a special slipcase and can cost up to $160, depending on where you buy it.

Mr. Hirst, who employs 120 people to help him with his work, had a hand in its design as he has had in the Sotheby’s installation, spending every day for the last six weeks there. He said he won’t be at the sale. Looking around as crews put the finishing touches on his installation, he let out a large sigh. “It’s me, me and me,” he said.

Does he ever get sick of “me”?